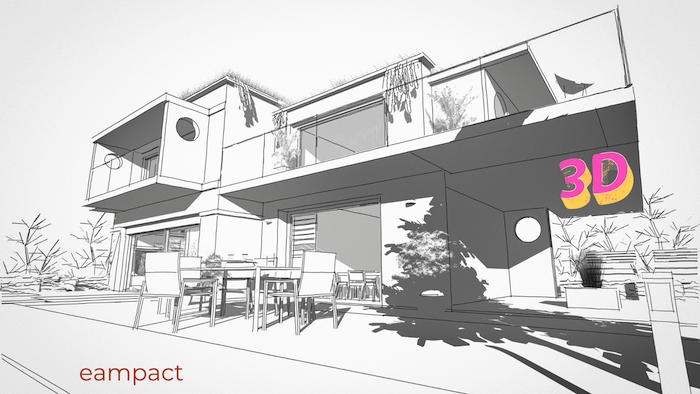 Using basically the same technology, these buildings are created with the help of very large printers and processing materials that are suitable for a building structure, usually concrete.

The first building that was built using 3D technologies was the canal house in Amsterdam, by DUS Architects. They used hotmelt: a bioplastic mix that is about 75% plant oil, to create units that were assembled together. The canal house was built in 2014, was available for visitors and then was dismantled in 2016.

A Chinese 3D construction company named WinSun also printed a house as early as 2014 and then moved on to printing an apartment building in 2015. They used a mixture of ground construction and industrial waste, such as glass and tailings, around a base of quick-drying cement mixed with a special hardening agent. Since then, the company has built various projects such as a government office building, green wall, sound barrier, a museum, and more.

A company named ICON claimed the first 3D printed permitted home. For their 3D printing construction projects, ICON uses Lavacrete, a proprietary Portland Cement-based mix, which they claim can withstand extreme weather and can be sourced from anywhere in the world. ICON also partnered with New Story to build an affordable 3D printed neighborhood in Mexico, that claimed to go through an earthquake with no damage, and homes in Austin, TX, which are built for the homeless that survived the snowstorm during winter 2021. 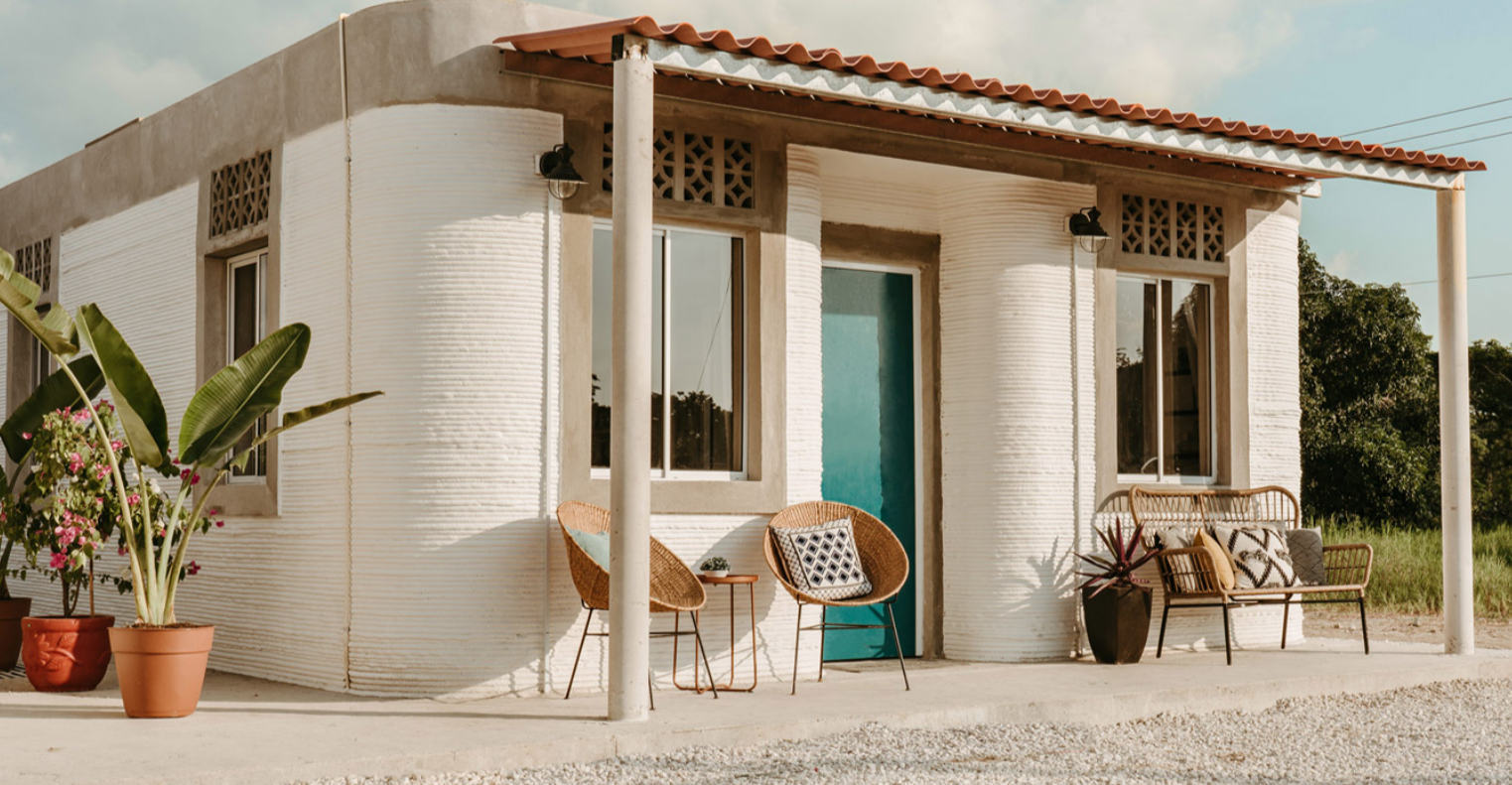 Dubai was the one to claim the first 3D printed office that became fully operational in 2016. The material used was a special mixture of cement.

3D printing has been an emerging trend for quite some time for many varying applications and has yet to become mainstream. However, in recent years, with the help of software, advanced materials, lower costs, and capital, there are some indications of a brighter future.

As with other applications, manufacturers in the construction space are emerging or joining this trend of using 3D printing technologies. Some manufacturers print the units in factories and then ship the completed units to the building’s site, which is a similar process to modular homes, and some transfer the large printers to the construction site to perform the actual printing on-site.

3D printed homes have characteristics that are different from traditional construction:

What About (True) Sustainability?

One aspect that is still not clear is how sustainable this type of construction is. In traditional construction, we can rely on building codes, and at times, third-party certifications that evaluate the durability and safety of the building, the materials used, the manufacturers, and any professionals involved. Since 3D printed buildings are relatively a new practice, code officials are not experienced and may not have the technical expertise to evaluate these buildings. Furthermore, third-party certifications are not yet abundant.

In 2017, UL started researching and consulting with experts to develop UL 3401. The standard is set to evaluate 3D printed construction with regards to quality, strength, effectiveness, fire resistance, durability, and level of safety. The evaluation covers properties such as mechanical properties, fire performance, vapor, air and water barriers, thermal insulation, indoor air quality, durability, integrity, and performance before and after environmental exposure conditions. 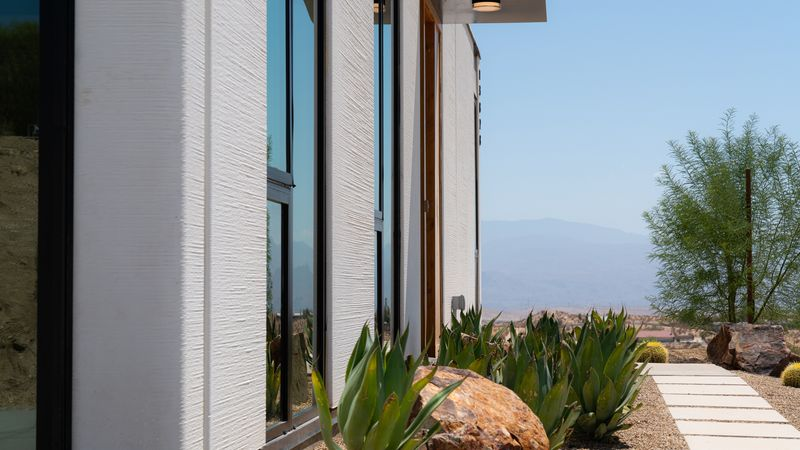 Mighty Buildings is the first company to have earned UL 3401 certification for 3D-printed buildings. This 3D printed house company print the buildings off-site with a thermoset composite and once complete, they ship them to the building site. The UL 3401 certification evaluates the durability and resilience of the structure as well as environmental aspects such as indoor air quality and insulation. Yet, thermoset polymer, which is the material processed in the printing process, cannot be remelted after it solidifies. Its material properties are fundamentally altered as it cures, which makes it very difficult to recycle. It is generally strong and durable but is it environmentally friendly? Not sure.

SQ4D is another company that prints 3D homes. They declare that their construction is safe, strong, and environmentally friendly. But without a third-party certification, we can either take their word that the structure is sustainable or not.

TECLA in Italy tried to tackle the material used for the 3D printing. With the technology of WASP, they printed three small habitable units and used reusable and recyclable materials, sourced from local soil and that are carbon-neutral. They state that the material is adaptable to any climate and context, but that will only be determined in the future, once it’s completed, occupied, and has been performing over time.
In the meantime, the United Kingdom Green Building Council (UKGBC) chose to include the project among sixteen others, in the Build Better Now virtual pavilion during COP26 in Glasgow.

Another 3D printed home that used the WASP technology, is a house called GAIA. The house was printed on-site with a natural mud mixture made from soil taken from the surrounding site, as well as waste materials from rice production such as chopped straw and rice husks. The company claims that it is a high-performing structure in terms of energy, with almost no environmental impact, it is biodegradable and will turn back to soil if not maintained. This sounds very promising in terms of the environment but raises questions about its resilience.

Similarly, the University of Maine and Oak Ridge National Laboratory designed and manufactured the BioHome3D from a 100% bio-based home. It is printed with wood flour or fine sawdust mixed with a binder made from corn. Unlike other 3D printed homes, in this design the roof is printed instead of the front of the house which is also made of wood. 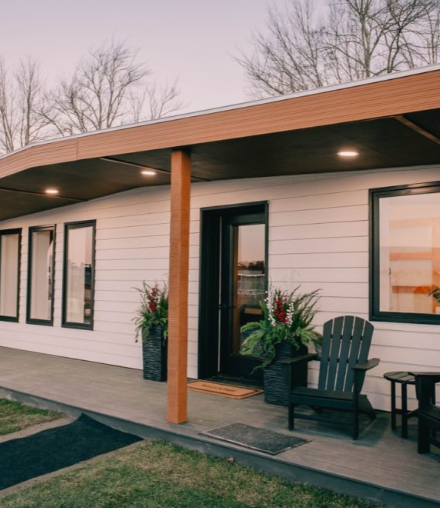 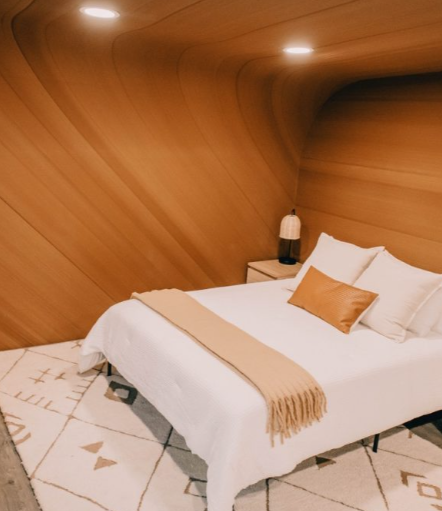 Using renewable and locally sourced wood fiber feedstock reduces the structure's environmental impact but raises questions about it's climate resilience. If all the home's elements are made of wood, the home is 100% recyclable but would it be fire retardant? Would it withstand a fire? Especially when a conventional gas stove installed within. The sloping curve of the design can help withstand strong winds but would the 100% wood insulation manage moisture well? Would it withstand water damage in case of a flood?

We reiterate that eco-friendly homes are crucial, but if they are not climate resilient, they won't sustain in most climates in the U.S.

Please leave a reply.Your email address will not be published.

eampact has not tested any of the products listed or mentioned in our blogs, nor do we recommend using them in your planned project/s. The products mentioned in our blogs and / or directory are a starting point for home developers and owners to get inspired by manufacturers that seem to design for resilience and go the extra mile to certify or test their products. However, it is your sole responsibility along with your service providers, consultants and hired professionals (architects, designers, contractors, engineers, realtor/developer) to evaluate and choose products for your projects.

eampact, its writers and publishers shall not be liable in the event of any consequential or incidental damages in connection with, or arising from, the use of the information contained within eampact's website, blogs, product listings, environmental data, forecasts and articles.

eampact, its writers and publishers, make no warranty of any kind, expressed or implied, with regard to the information contained in this website, blogs, product listings, environmental data, forecasts and articles.

The Content and the Marks in our Blog ("The Elements") are provided on the Site “AS IS” for your information and personal use only. Except as expressly provided in our Terms and Conditions, no part of the Site and no Content or Marks may be copied, reproduced, aggregated, republished, uploaded, posted, publicly displayed, encoded, translated, transmitted, distributed, sold, licensed, or otherwise exploited for any commercial purpose whatsoever, without our express prior written permission.

Thank you for your interest in sharing a project, experience, or article with eampact. Please review our editorial policy to validate whether your story aligns with our objectives and mission. Please contact us through the contact us form if you would like to discuss with us or seek further clarifications.

eampact’s objective is to help people protect and improve their lives and property by conveying complex and scattered information about extreme environmental risks and associated solutions, all in a simple fashion and in one centralized location.

We aim to drive people to take action and better plan their future. It starts with bridging information gaps about how extreme events impact our homes and how to design and build against these risks by adding safety, comfort and resilience.

Your voice and style matters - if you went through the challenges of figuring out the risks, finding the right solutions and professionals, and your resilient project prevailed - we want to hear it just like you experienced it. However, we do strive to provide our readers with professional information backed by data and sources of truth. Please make sure that:

Please note, that we may want to use good content and share it forward (on eampact or other media), therefore, we do ask to obtain non-exclusive, irrevocable, and royalty-free permission to use the content.

As with our own blogs, our criteria for sharing your story is based on meeting these key objectives:

Please note, we reserve the right to refuse a submission based on the criteria mentioned above as well as our team’s objectives and judgment. It may take us up to 30 business days to review your story and either publish it or return to you with further clarifications or revisions, however such iterations may not result in the publication of your story if it still doesn't meet or match our editorial objectives.

We list solution / product manufacturers that seem to demonstrate design and manufacturing of products that aim to protect home occupants and improve the resilience and durability of the home in respective climate zones and against extreme climate events.

In addition, we analyze and look at manufactures that:

In addition, we are looking for service providers that:

*Our main aim is to find products that add resilience to homes in the face of extreme events. In addition, we believe all these products can be green / eco-friendly. However, in some cases we had to sacrifice some of our environmental aspirations and favor resilience, simply because we could not find a fully green alternative. In many cases, unless we adopt indigenous solutions, technology is still catching up to provide both resiliency and pure eco-friendly solutions at affordable costs. While new technologies and materials are great, their adoption takes time and requires caution until proven by means of certification, 3rd party testing and the test of time. In addition, products should be tested under different climate zone conditions, over time, in addition to how they perform during and after an extreme event.

We list solution / product manufacturers that seem to demonstrate design and manufacturing of products that aim to protect home occupants and improve the resilience and durability of the home in respective climate zones and against extreme climate events.

In addition, we analyze and look at manufactures that:

*Our main aim is to find products that add resilience to homes in the face of extreme events. In addition, we believe all these products can be green / eco-friendly. However, in some cases we had to sacrifice some of our environmental aspirations and favor resilience, simply because we could not find a fully green alternative. In many cases, unless we adopt indigenous solutions, technology is still catching up to provide both resiliency and pure eco-friendly solutions at affordable costs. While new technologies and materials are great, their adoption takes time and requires caution until proven by means of certification, 3rd party testing and the test of time. In addition, products should be tested under different climate zone conditions, over time, in addition to how they perform during and after an extreme event.

In addition, we are looking for professionals / service providers that:

*The following are top examples of what constitutes as a “resilient” project:

* Our main aim is to find products that add resiliency to homes in the face of extreme events, however, we prefer mentioning products that are green and eco-friendly.